Experiments with non-conventional music formats, like multi-channel compositions or multiagent based generative music. Mostly inspired by ideas of Karl Stockhausen.

The first experiment, exhibited in Hackney Marshes in 2019 as part of the field of sounds installation (https://kailaboratory.com/field-of-sounds), is a composition for 16 speakers organized in a four-by-four grid. The music was generated via a simple two agents simulation, where one agent was chasing the other. 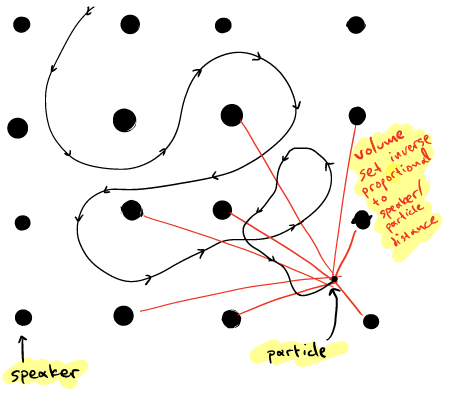 Each agent/particle was influencing the location of the sound in the 3D space. To achieve this, each speaker volume was set to be inverse proportional to its distance from the agent/particle.

The simulation was conducted using https://p5js.org/ which was sending OSC messages to ableton live, controlling the volume of the corresponding speaker channel according the distance of the particle from each speaker.

Hi, I'm Panagiotis, a DPhil student in Autonomous Intelligent Machines and Systems at the University of Oxford, UK ».